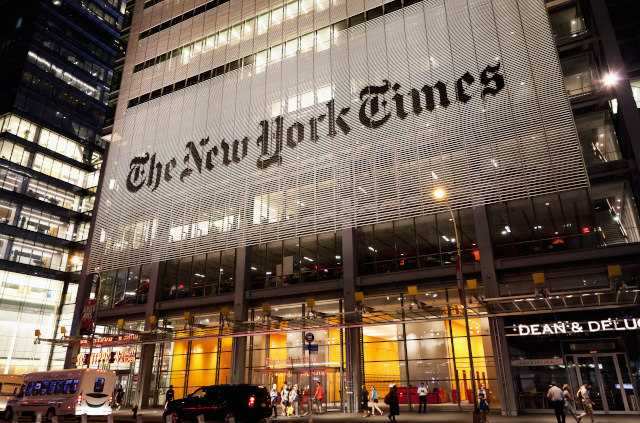 (Patriot Insider) – The COVID pandemic is mostly a thing of the past, however, remnants of the trauma experienced the world over still remain, looming in the shadows, serving as a reminder of what could one day be once again.

Some of the remnants of the pandemic are less in the shadows like the fact that 1,300 employees of The New York Times are refusing to go back to work.

Their reasoning is the inflation caused by Joe Biden, which many believe is the result of the pandemic.

A report by the New York Post explained that, for the 1,300 workers, it would mean they would have to spend more on “gas, mass transit, clothing and lunches.”

The @nytimes is giving employees branded lunch boxes this week as a return-to-office perk. We want respect and a fair contract instead — so I’m working from home this week along with 1,300 of my @NYTimesGuild and @NYTGuildTech colleagues, with support from @WirecutterUnion.

The refusal to return to the office has come about as workers negotiate new contracts with the company. Things don’t seem to be going well for the Times, which is insisting workers come back to their offices for several days of the work week.

The Post called the dispute “bitter” and said that 1,316 workers “had signed a pledge not to return to the office.”

Was the Times really expecting anything less from their entitled, woke, progressive staff? Having an army of leftists on the payroll has consequences.

Tom Coffey, a 25-year veteran editor at the Times, told the Post, “People are livid.”

The meltdown by Times’ employees came after the corporation told them they needed to return to the office this week. Coffey contends that it will just cost employees too much to return to work with inflation being so high.

We can’t argue with their point that inflation is too high. Under Biden inflation peaked at 9.1% earlier this summer and has been at 8.5% in July and 8.3% in August. Things are certainly not going well for Americans’ bank accounts, that much is not debatable.

For their part, however, the Times seems to be being reasonable. They have not set a specific number of days for employees to actually show up to the office per week and it’s been left up to individual departments.

A spokesman for the Times also said, “We continue to believe that a hybrid work environment best suits the New York Times at this moment.”

Meanwhile, the Times workers contract expired in 2021 and the most recent offer was a 4% raise. The workers are naturally insisting on an 8% raise plus another 5% or so for inflation.

All to peddle the left’s lies and propaganda.

A Times official told The Post, “We respect the rights of our colleagues in the Guild to make their voices heard. We’re actively working with the NYT NewsGuild to reach a collective bargaining agreement that financially rewards our journalists for their contributions to the success of The Times, is fiscally responsible as the company remains in a growth mode, and continues to take into account the industry landscape.”

Looks like the Times is going to have to pony up some serious cash if they want their workers to actually show up in person for work.

Ironically, if the Times spent the last 6+ years honestly reporting the news and facts, maybe Biden wouldn’t be president and the country wouldn’t be in a recession with record-breaking inflation and workers wouldn’t have anything to complain about.

We can’t help but be amused by the Times’ current predicament.